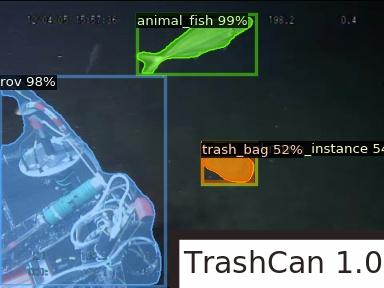 The TrashCan dataset is comprised of annotated images (7,212 images currently) which contain observations of trash, ROVs, and a wide variety of undersea flora and fauna. The annotations in this dataset take the format of instance segmentation annotations: bitmaps containing a mask marking which pixels in the image contain each object. The imagery in TrashCan is sourced from the J-EDI (JAMSTEC E-Library of Deep-sea Images) dataset, curated by the Japan Agency of Marine Earth Science and Technology (JAMSTEC). This dataset contains videos from ROVs operated by JAMSTEC since 1982, largely in the sea of Japan. The dataset has two versions, TrashCan-Material and TrashCan-Instance, corresponding to different object class configurations. The eventual goal is to develop efficient and accurate trash detection methods suitable for onboard robot deployment. While datasets have previously been created containing bounding box level annotations of trash in marine environments, TrashCan is, to the best of our knowledge, the first instance-segmentation annotated dataset of underwater trash. It is our hope that the release of this dataset will facilitate further research on this challenging problem, bringing the marine robotics community closer to a solution for the urgent problem of autonomous trash detection and removal.